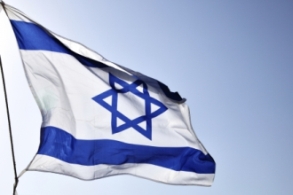 The flag of Israel was adopted on October 28, 1948, five months after the establishment of the State of Israel. It depicts a blue Star of David (Magen David, מָגֵן דָּוִד) on a white background, between two horizontal blue stripes.

The blue stripes are intended to symbolize the stripes on a tallit, the traditional Jewish prayer shawl. The portrayal of a Star of David on the flag of the State of Israel is a widely acknowledged symbol of the Jewish people and of Judaism.