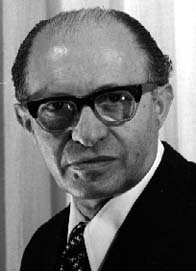 Menachem Begin was born in Russia in the year 1913. Before the creation of the state of Israel, he was the leader of the Zionist military organization called Zvai Leumi Irgun. He was also a founding member of the Likud party in 1973 with Ariel Sharon and became the sixth Prime Minister of Israel in 1977. During his government he signed a peace treaty with Egypt, for which he and Anwar Sadat shared the Nobel Prize for Peace. Begin suffered a severe heart attack in his apartment, dying in 1992.