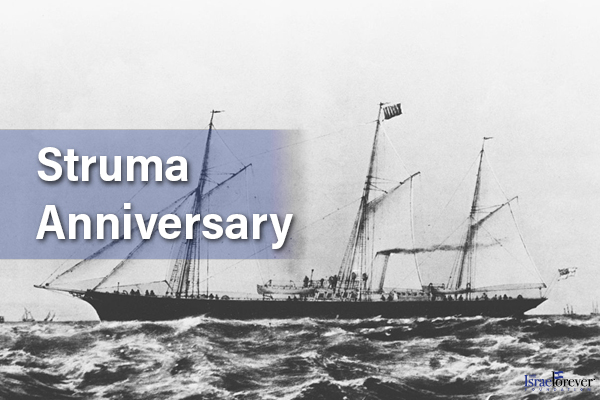 In 1941, as Europe’s Jews were being systematically starved, tortured and murdered, thousands of Jews desperate to escape did everything possible to escape the Nazis.

In December, almost 800 Jewish refugees –including kids and babies- boarded a boat named the Struma from Romania. They planned to travel to Istanbul, apply for visas and then sail to Palestine. Despite the high price and the abominable conditions –the ship was unsafe, overcrowded and lacked adequate sanitary facilities-, it was still the only chance of escaping Europe and the nazis. Once they arrived to Istanbul on December 16, 1941, the passengers were informed they would not get visas to enter Palestine and, furthermore, would not be permitted entry into Turkey.

The boat was kept in quarantine in Istanbul's harbor for more than two months.

On 23 February 1942, with her engine still inoperable and her refugee passengers aboard, Turkish authorities towed Struma from Istanbul through the Bosphorus out to the coast of Şile in North Istanbul. Within hours, in the morning of 24 February, the Soviet submarine Shch-213 torpedoed her, killing an estimated 781 refugees plus 10 crew, making it the Black Sea's largest exclusively civilian naval disaster of World War II.