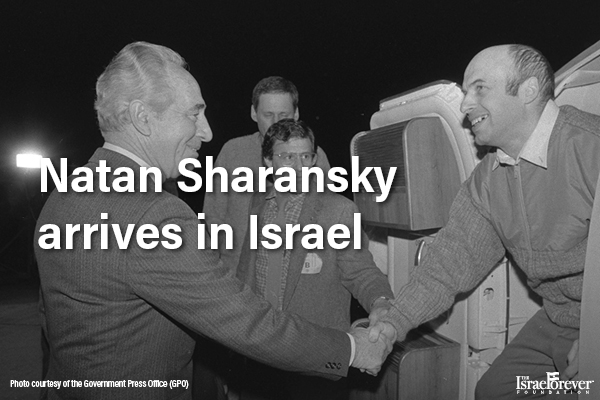 Natan Sharansky born on January 20, 1948 in Donetsk, Ukraine, is an activist for Soviet human rights, as well as being an Israeli politician and author.

After having been denied an exit visa to Israel for reasons which were not specified in 1973, he became an activist of human rights and also emerged as one of the founders of the Moscow Helsinki Group, a movement for solidarity among Soviet dissidents, Jews and gentiles alike.

Arrested in 1977 and sentenced in 1978 by multiple charges, including being a spy for the United States, Sharansky was sentenced to 13 years of imprisonment, including hard labor and brutal solitary confinement.

When given his sentencing, Sharansky famously stated that to the court he had nothing to say—to his wife and the Jewish people he said 'Next Year in Jerusalem".

After spending nine years in Soviet prisons and labor camps in Siberia, Sharansky was released on February 11, 1986 thanks to international pressure and a campaign led by his wife, Avital Sharansky. That same day, he immigrated to Israel and arrived in Jerusalem, where he continued to fight for the rights of refuseniks.